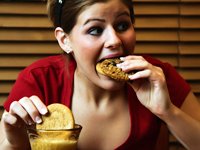 Many children, if left to their own devices in the kitchen, will experiment by combining all different kinds of foods, spices, condiments, beverages, and anything else they can get their hands on just to see what it turns into.  If no parent has taken notice, they may dare a sibling or friend to try it.  But that’s really more to elicit a reaction than because they truly believe someone would eat such a crazy mess.  Then again, maybe they’re onto something. New research has found that preparing bizarre combinations of unusual food is common behavior for a large segment of adult binge eaters.

The study, which took place at the University of Alabama at Birmingham, found that approximately 25 percent of those who were identified as binge eaters would mix highly unusual groupings of food during a binge.1 “Secretive Food Concocting: New Characteristic of Binge Eating Identified.” Science Daily. 3 January 2013. Accessed 9 January 2013. http://www.sciencedaily.com/releases/2013/01/130103130754.htm   The participants were 507 male and female undergraduate students at the University of Alabama at Birmingham and the University of Texas at El Paso who were taking Psychology 101.  There were 45 additional participants who were receiving outpatient treatment for an eating disorder at a clinic in Cincinnati, Ohio.

The subjects all answered surveys about their eating habits and the feelings attached to them. Some of the unusual food combinations they admitted to concocting included Oreos with peanut butter, pickles, and chocolate (and no, they weren’t pregnant); French fries in ice cream; and cheese with eggs, marinara sauce, pasta, and cut-up Slim Jims. One in every four participants in this study, which, remember, included less than 10 percent of eating disorder sufferers who had sought treatment, ate these types of concoctions.  The concoction eaters were more likely to binge eat than their peers who may overeat but do not exhibit binge behavior.  A binge is defined as a compulsion to overeat even when you are not feeling hungry.2 “Binge-eating disorder.” Mayo Clinic.3 Chandler-Laney, Paula C.; et al. “A history of human-like dieting alters serotonergic control of feeing and neurochemical balance in a rat model of binge-eating.” International Journal of Eating Disorders. 1 November 2006. Accessed 10 January 2013. http://onlinelibrary.wiley.com/doi/10.1002/eat.20349/abstract April 2012. Accessed 10 January 2013. http://www.mayoclinic.com/health/binge-eating-disorder/DS00608

Of the volunteers who tend to eat concoctions, 41.2 percent reported that it typically occurs due to a particular food craving.  This was the reason most often cited by concoctors.  A mere nine percent of the subjects said it was hunger that caused them to create and eat the concoction.  This actually makes sense, according to what’s understood about the mental state of most binge eaters.  Binges are rarely about satisfying hunger and the majority take place after a meal has been eaten.

The researchers theorize that it is the very control that binge eaters display when dieting that leads to the frenzied creation of concoctions when they lose that control.  Once they begin feeling the urge to gorge, they focus on the foods they have been depriving themselves of and combine them in all sorts of odd ways.  Earlier studies by the lead author found that binge eating was closely linked to having dieted numerous times in the past.  Then, when an edible item that was considered off-limits by the dieter was around, it would become irresistible and set off a binge.3

Food concocting is an offshoot of binge eating that is not frequently discussed and many people are unaware of it.  There is enough of a stigma around eating disorders and binge eating that those who make concoctions seem to be especially secretive about the behavior.  Those involved in the study reported feelings of excitement and anxiety while creating their concoctions, almost to the level of euphoria that drugs can induce.  Yet, after consuming their creation, the concoctors almost universally reported feeling terrible.  And, since most of the study participants were not found in clinical settings, this shows that, perhaps due to shame, there may very well be many people in the general population who are secret concoctors and binge eaters.

Unlike other eating disorders, binge eating affects men and women fairly equally.  Binge eaters are at much higher risk for health problems including obesity, depression, high blood pressure, diabetes, and high cholesterol levels.4 “Binge eating disorder fact sheet.” Womens Health. 15 June 2009. Accessed 10 January 2013. http://www.womenshealth.gov/publications/our-publications/fact-sheet/binge-eating-disorder.cfm   If you or someone you love is a binge eater, whether concoctions are involved or not, it’s important to get help.  There are many books, support groups, and resources available to gain knowledge about this disorder and combat it.  Working with a nutritionist may help you devise better ways to avoid the feeling of deprivation and ensure that you are getting all of the nutrients your body truly needs.  Try to practice moderation with all kinds of foods and over time, you may find the urge to binge receding. And while you’re at it, you just might want to try a natural dopamine stimulating supplement such as SAMe,5 Sood A, Prasad K, Croghan IT, et al. “S-adenosyl-L-methionine (SAMe) for smoking abstinence: a randomized clinical trial.” J Altern Complement Med. 2012 Sep;18(9):854-9. http://www.ncbi.nlm.nih.gov/pubmed/22901308 since the connection between dopamine and binge eating is pretty well established.6 Kathryn Hansen. “Dopamine and Urges to Binge” Brain Over Binge. 18 March 2011. (Accessed 11 Jan 2013.) http://brainoverbinge.blogspot.com/2011/03/dopamine-and-urges-to-binge.html