Better Vision as We Age 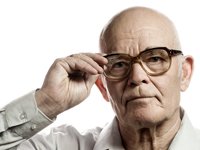 Two surveys of senior citizens across the United States discovered that, in less than a 30-year period, the reported instances of serious vision trouble went down by more than 50 percent.

“They say that age is all in your mind.  The trick is keeping it from creeping down into your body.” — Author Unknown

Getting older isn’t so easy.  There are lots of extra aches and pains, wrinkles, and more health issues that seem to pop up in each passing decade.  One of the aging process areas in which most of us start to experience difficulty is eyesight.  Many vision problems are much more common in the elderly than any other population group.  However, before any of us gets too depressed about what may be in store for us as we approach our golden years, let’s focus on a bright spot.  New research has found that far fewer of the elderly have eyesight “impairments” than was the case a few decades ago.

Two surveys of senior citizens across the United States were analyzed by scientists at Northwestern University Feinberg School of Medicine in Chicago, and the Institute for Health & Aging and Disability Statistics Center at the University of California, San Francisco.1  They discovered that, in less than a 30-year period, the reported instances of serious vision trouble went down by more than 50 percent.  The study focused on eyesight problems that may limit a person’s activity level as well as those that truly impair their abilities.

In the first segment of the study in 1984, nearly 25 percent of the respondents who were 65 or over said they had difficulty reading the newspaper due to vision loss.  By the second segment of the study in 2010, that figure was reduced to only 10 percent of the elderly respondents.  While the researchers did not expand on why they saw improving eyesight in senior citizens, there are several possible answers.  First and foremost is likely the fact that many fewer Americans smoke cigarettes nowadays.  In the 1980s, approximately one-third of U.S. adults were smokers.  Now, however, that number has dropped to about 20 percent.  We still have a way to go, but at least that is a significant improvement.  This is critical because cigarette smoking is linked to a number of diseases of the eye, particularly macular degeneration, which is one of the most prevalent causes of vision loss in older people, affecting the clarity of their central vision.2

Another factor may be improvements in cataract surgery.  Complications such as posterior capsule opacity and retinal detachment were more routine 30 years ago, increasing the risks of undergoing this procedure and leaving many older people unwilling to take the risk of making their vision even worse.3  Now, this is the most routine type of surgery in the United States.4

Interestingly, however, another major cause of vision loss in the elderly is diabetes, the rate of which, of course, has skyrocketed in the United States between 1984 and 2010.  In 1984, there were 611,000 new cases of diagnosed diabetes in adults between the ages of 18 and 79.  By 2009, that number had jumped to 1,812,000 new cases.5  And yet, so far, there has not been a concomitant increase in vision problems. Perhaps, more people with diabetes may be aware of how to properly maintain blood sugar levels, leading to fewer eye-related complications.  On the other hand, Americans are getting diagnosed with diabetes earlier and earlier because obesity is a major risk factor and the population in general is getting heavier.  This could be a statistic that turns the facts of the current study around in another 25 or 30 years, to eventually show that vision loss may become more common once again in the elderly if we don’t get the diabetes epidemic under control.

Another major factor in the aging process — including the vision problems many people face in old age — is protein glycation, which is caused by increased levels of sugar in the blood.  You can find out more about this uncontrolled reaction of sugars with the body’s proteins and the damage it can cause in Jon Barron’s anti-aging newsletter.  Carnosine supplementation, on the other hand, has been shown to protect against protein glycation, which may also protect your vision if you’re already tending to diabetes or pre-diabetes.  Even if the numbers in the study show we are headed in the right direction with preserving seniors’ vision, it can’t hurt to have a little extra protection in the form of a supplement, which helps our eyes as well as other aspects of anti-aging.

Gallery image with caption: Six Things to Consider Before Getting Botox or Dermal Fillers

Gallery image with caption: Getting Rid of Wrinkles