The Benefits of a Junk Food Ban 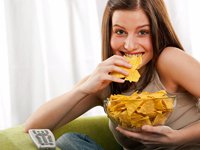 The state of California passed a law in 2007 that placed restrictions on junk foods sold in vending machines and as cafeteria extras in the schools.  The intention was to help students cut back on calories consumed from junk foods and possibly get a little healthier.  A new study followed up on the outcome so far, and found that these pioneering lawmakers did in fact do the kids of California a positive service.

The research, which took place at the University of Illinois at Chicago, discovered that high school students in California have a lower caloric intake and are eating less fat and sugar — at least during school hours — than their counterparts elsewhere in the country.1  And even if it makes no impact on their food consumption outside of school, it has enough of an influence to reduce their overall daily calorie count.

The scientists analyzed data collected by the Centers for Disease Control and Prevention on the eating habits of 680 high school students in California and 14 states that have no restrictions on the foods sold in school.  Of all the states considered, the kids of California have the lowest average daily calorie count, as well as the lowest for consumption of fat and added sugars.  It stands to reason that changes in their school day diets made a large part of the difference, since their daily calorie consumption from school food was lower than that of students elsewhere. California high schoolers received approximately 21.5 percent of their daily calories at school, while other states averaged 28.4 percent.

Since their overall caloric intake is almost 160 calories less on average than the typical teenager in another state, it would seem that they are not going hungry or eating more when they go home to make up the difference.  And this 160 calories or so every single day adds up.  In a five-day school week, that’s 800 fewer calories consumed. Considering that every 3500 calories equals a pound of extra body weight, we’re talking about almost one pound not gained a month, or 12 pounds a year. And over 3 years of high school, that’s a difference of 36 pounds in extra body weight not gained.  Over time, it’s small changes and cutbacks such as these that may be the key to preventing obesity.

California has been working hard to limit the junk foods its children have access to for years.  The state has prohibited soft drinks from being sold, first in elementary schools then later in high schools as well.  But even in a forward-thinking, health-minded state such as California, there are plenty of improvements that can still be made.  In actuality, the junk food ban is not a true ban.  It’s not that snacks devoid of nutrition are outlawed; they simply have to come in below a certain threshold in fat and calorie counts.  So these kids are eating lighter to be sure, but not necessarily healthier.  Instead of a bag of greasy, full-fat potato chips, they are getting baked chips.  Much lower in calories, but still 100%, high-glycemic, non-nutritional, empty calories and made with lots of added chemical junk.

But back to the positive side, anything that can make a dent in childhood obesity figures is good news.  It’s estimated that childhood obesity ultimately costs as much as $100 billion a year in the United States alone.  When the effort is made, however, the benefits start to appear, as they have in California.  And the California results merely confirm an experiment that took place on the other side of the country, in Somerville, Massachusetts.  In 2002, a professor at nearby Tufts University started a program called Shape Up Somerville.2  The community got on board and started making improvements in various health-related areas.  They hired more crossing guards and repainted town crosswalks, which increased the number of children walking to school by five percent.  The schools started offering fresh produce every day for breakfast and lunch and removed many high calorie items such as French fries from their menus.  Many local restaurants joined in and began providing half-portion options.  Five years after it was begun, residents reported that they were very happy with the results.  And the research showed that 8-year-olds in Somerville had slowed their weight gains by approximately a pound over each eight months school year.

These are the kinds of changes that add up over time.  Plus, it starts teaching our youth at an early age little ways to make their lifestyles more healthy for years to come.