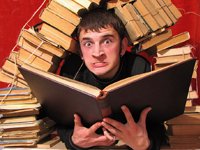 It is practically a right of passage for college students to study all night cramming for a big exam or final.  But the truth of the matter is, if you truly want to get better grades, you are probably better off closing the books early and getting a solid night’s sleep before the test.  According to sleep researchers, students generally earn higher grades when they are well rested as opposed to when they stay up all night to pack in extra studying.1 “Forget All-Night Studying, a Good Night’s Sleep Is Key to Doing Well On Exams.” Science Daily. 21 November 2012. Accessed 25 November 2012. http://www.sciencedaily.com/releases/2012/11/121121145400.htm

The scientists of the Harris Health Sleep Disorders Center in Houston, Texas, have found that academic performance is enhanced after a full night of rest.  Sleeping will do more for you than additional studying at that point because your ability to remain focused on the task at hand, as well as your recall skills, function optimally when you are well rested.  They base their assertions on the results of the numerous sleep studies conducted each year at their facility. But this assumes you’re merely reviewing material while cramming, not looking at it for the first time.

Unfortunately, many students do not even start looking at the materials for a test until the test is looming before them.  And the bigger the exam, such as a midterm or final, the more coursework it will be covering.  Given that scenario, it isn’t really realistic for most people to expect to learn an entire semester’s worth of work in a class in one night of intensive studying.  Even if you are not the type to do a little studying every night to increase your knowledge as you go along, it is essential to at least begin your cramming a couple of weeks before an exam.  That way, you can break it down piece by piece and be ready to get a full night’s sleep just before the test.

The sleep specialists recommend a solid eight hours of sleep, or more if you can manage it, for the evening prior to your test.  If you cram by studying all night, you are only going to take in so much information in the wee hours while staying up all night — but then be too tired to easily access it during the exam.  By sleeping, on the other hand, you boost your powers of concentration and ability to recall the knowledge previously stored within memory.  These are two key factors in performing well on an exam, or in any important event, for that matter.

Most of us, adults and children alike, fall far short of our true sleep requirements most of the time.2 “Insufficient Sleep Is a Public Health Epidemic.” Centers for Disease Control and Prevention. 17 March 2011. Accessed 26 November 2012. http://www.cdc.gov/features/dssleep/
College students are among the worst offenders, with their erratic schedules and social habits that often keep them out late.  However, a chronic lack of adequate sleep (8-9 hours a night for most adults) creates its own issues, including reduced ability to fight infections, weight gain, and memory and cognition problems.3 Wolter, Patti. “The big snooze.” Self. Accessed 26 November 2012. http://www.self.com/health/2010/01/lack-of-sleep-health-risks?currentPage=1   So, the more often you are failing to get enough sleep, the less attention you will be able to pay in class and the less likely it will be that you understand the material in the first place, which in turn makes studying that much harder.

What can you do to improve your chances of getting a 4.0 while simultaneously avoiding the pitfalls of chronic exhaustion? Whatever you do, don’t rely on caffeinated beverages such as coffee, energy drinks, or even soda to help keep you awake and attentive.  Heavy caffeine use–more than 500 to 600 mg day, or the equivalent of four or five cups of coffee, three Monster Energy Drinks, or seven or eight cans of Pepsi Max4 “Caffeine Content of Drinks.” Energy Fiend. Accessed 26 November 2012. http://www.energyfiend.com/the-caffeine-database –can cause such problems as insomnia, irritability, anxiety, headaches, and more. Plus, caffeine will stay in your system for hours after you are done drinking, often leaving you unable to fall asleep when you finally are ready — or to get a deep sleep when you finally do drift off.

Getting on the right track involves developing better habits to make sure you get a solid night’s sleep as often as possible.  No one achieves this goal every single night, but at least shoot for eight hours as frequently as you can.  If you don’t take evening classes, that’s an ideal time to do your studying.  For most people, the brain is highly alert and ready to focus after dinner.  Try to pace yourself and do a little reviewing every evening for a week or two before the exam so you don’t feel compelled to squeeze it all in the night before. Also, learn to work with your brain’s cycles to maximize retention. Take a break every 20-40 minutes for 10 minutes of vegging out. This allows your brain to process and store the information you’ve just been studying. Without that break, retention after 40 minutes bottoms out for the rest of your study period. By taking regular breaks, you keep retention maximized. To keep material locked in, review it 10 minutes after studying it for the first time, then the next day, then three days later, and then once a week. That keeps it locked in.  Finally, give it 100 percent of your attention and effort, and you should do your best every single time.