And the Blind Shall See 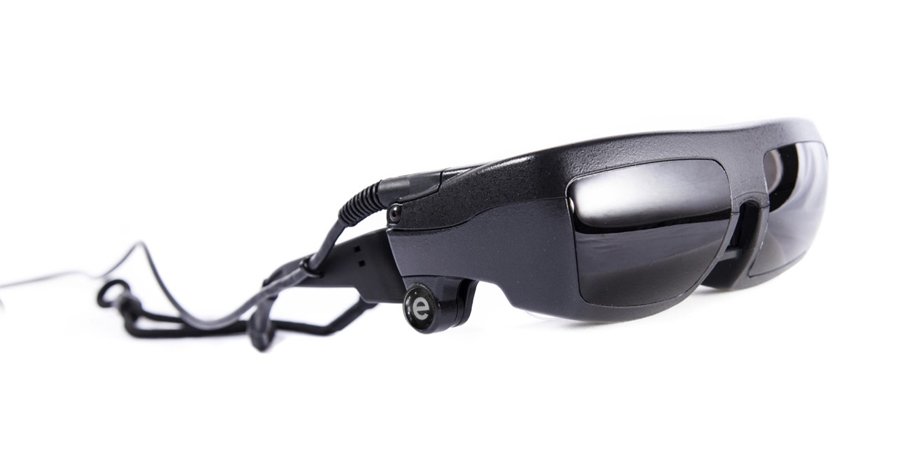 In Star Trek Next Generation, most of the characters are perfect physical specimens. One crew-member, though, is an exception. The engineer Geordi La Forge has been completely blind since birth, but his handicap doesn’t stop him because he’s got technology on his side.1 http://www.startrek.com/database_article/la-forge-Geordi Geordi wears a pair of thick, wrap-around goggles that attach to his brain, and these goggles help him to see things that even humans can’t.

Well, as it turns out, like so many science fiction projections, it seems it was not so much fantasy as just ahead of its time. In fact, one of the most extraordinary advances of medicine in the past few years has been the development of real-life visors that actually help legally blind people see again. There are several such products out there already and more in development. Perhaps the most remarkable is the “e-Sight” device, which looks something like a cross between spelunker goggles, sunglasses, and the Star-Trek visor, although in this case, no attachment to the brain is required.

eSight is the brainchild of Canadian engineer Conrad Lewis, who has two vision-impaired sisters. Lewis managed to raise $30 million from investors to launch his company and then set about to create a portable, wearable vision-assist device.2 Holton, Bill. “eSight Eyewear and Smart Glasses from Assisted Vision.” May 2014. AFB AccessWorld Magazine. 1 July 2016. http://www.afb.org/afbpress/pub.asp?DocID=aw150506 As the company’s website explains:3 http://www.esighteyewear.com/learn-more/how-does-esight-work

“eSight’s wearable, hands-free headset houses a small, high-speed camera that captures everything the eSight user is looking at. The captured live video stream is instantly sent to a powerful computer that uses proprietary software to process each pixel of video captured by the camera…The enhanced video is sent back to the headset and displayed on two, powerful Organic-LED screens in front of the user’s eyes. Typically, these full color video images can be clearly seen by the eSight user with unprecedented visual clarity — in essence breaking through most underlying eye conditions that cause their blindness.”

The aesthetics of the device aren’t quite perfected yet, to say the least, and the so-called portability involves carrying around a small control box attached to a wire on the goggles or attaching the box to your belt. On the other hand, the company claims that eSight should work for the vast majority of legally blind, but not necessarily sightless, individuals.4 http://www.esighteyewear.com/learn-more/who-does-esight-work-for In the company’s own trials, they’ve found that three-fourths of those who try the device are able to see when using it it. For the 14 percent of blind individuals who have absolutely no vision or very profound vision loss, as well as for those with severe peripheral vision loss, the glasses are, unfortunately, ineffective.

Conditions that eSight typically helps with include macular degeneration, diabetic retinopathy, Stargardt’s Disease, and many other sight loss conditions that create a blind spot in the main field of vision. It may not work for vision loss caused some forms of glaucoma, since glaucoma typically involves loss of peripheral vision.  As company representative Alexandra Dalimonte explains, “As long as they have peripheral vision we’re able to use that to almost overstep the blind spot. We can fill in that gap that their natural sight can’t see anymore.”5 “eSight for Blindness.” 1 June 2016. Vision Channel. 1 July 2016. http://www.ivanhoe.com/channels/p_channelstory.cfm?storyid=36532 The device also doesn’t usually work for those who have retinitis pigmentosa.

The claims of effectiveness to date have been based on a Canadian study and enough user testimonials to earn FDA approval. And it’s already on the market. eSight isn’t subject to the same rigorous regulatory conditions and testing protocol as some medical devices since it requires no surgery and isn’t taken internally. Nevertheless, the company decided to run clinical trials anyway to leave no doubt that the product actually works well. Clinical trials are now being initiated at some of the leading eye-care facilities in the US, including Johns Hopkins Eye Center, Bascom Palmer Eye Institute in Miami, and Kellogg Eye Center at the University of Michigan.6 ClinicalTrials.gov. 1 July 2016. http://clinicaltrials.gov/ct2/show/NCT02616900 In fact, most of these locations are currently recruiting legally blind volunteers between the ages of 13-75 for the clinical trials, so if you know anyone who might be eligible, do alert them.

The price tag for eSight runs $15,000 (unless you get it free as part of the clinical trial). There’s no insurance coverage as of now, but if you have (or can raise) the funds, the company offers free demonstrations nationwide so you can easily find out if it will work for you. Those people for whom it does work claim the device changed their lives, and there are many tear-jerker video testimonials on the eSight website attesting to that fact. There, you can watch sight-impaired mothers seeing their own children for the first time, blind kids getting a first look at their parents, blind men finally viewing their wives, even a blind man flying a plane. The testimonials are moving enough to make you want to empty your bank account to help those who can’t afford the device.

Not everyone is so enthusiastic, though. In a thorough and honest You Tube review, “Sam with a Blind Spot,” offers his comments after experiencing his first eSight demonstration.7 http://www.youtube.com/watch?v=iCWQ5b09ZY4 While Sam’s ability to read an eye chart improved 400 percent while wearing the eSight device, he wasn’t able to read text close-up, as the device won’t focus at a distance closer than 12 inches. Plus, because his condition involves extreme light sensitivity, he couldn’t see well in bright daylight.

“I’ve got to say I’m disappointed,” he said after his demo, although he emphasized that eSight might work lots better for others than it did for him. He pointed out several shortcomings that aren’t highlighted in the literature, including the fact that the batteries only last four hours before needing recharging. Also, it takes five months of training for most users to learn how to correctly use their eSight device.

The company is working to develop a smaller, lighter, wireless version with more capacity, and no doubt, vast improvements are on the horizon. Meanwhile, other companies are developing   vision restoring devices, too, particularly Second Sight, which has developed an assistive technology for those with retinitis pigmentosa, a condition that causes death of cells and rods in the retina so that the individual gradually has severe loss of vision. fn] “Retinitis Pigmentosa.” Foundation Fighting Blindness. 1 July 2016. http://www.blindness.org/retinitis-pigmentosa [/fn]

And then there’s Second Sight. Unlike eSight, Second Sight requires users to get an implant that gets surgically placed during a four-hour procedure.  After that, the system works in a way similar to eSight. As the company website explains,

“A miniature video camera housed in the patient’s glasses captures a scene. The video is sent to a small patient-worn computer … where it is processed and transformed into instructions that are sent back to the glasses via a cable. These instructions are transmitted wirelessly to an antenna in the implant. The signals are then sent to the electrode array, which emits small pulses of electricity. These pulses bypass the damaged photoreceptors and stimulate the retina’s remaining cells, which transmit the visual information along the optic nerve to the brain creating the perception of patterns of light. Patients learn to interpret these as visual patterns.”

In other words, Second Sight allows patients to distinguish patterns and light, but not images in the traditional sense.

One thing seems clear: In the not-too-distant future, many sight-impaired people will be slipping on goggles­­­–or better yet, fashionable glasses –so that they can see again (or for the first time), providing that the price for the technology comes down and the insurance companies agree to pick up the tab.