Preventing Cancer by Not Frying, Baking, and Roasting Foods

Dangers of Frying, Baking, and Roasting 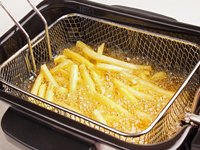 Nobody ever called French fries health food, with their high saturated fat content. But it isn’t just the artery-clogging factor that makes the fries so deadly: anyone interested in actively preventing cancer should know that they also contain a carcinogenic chemical about which the Food and Drug Administration has just issued a warning.1 Walton, Alice G. “The FDA Calls Out Yet Another Food Chemical to Avoid: Acrylamide.” 15 November 2013. Forbes. 15 November 2013. http://www.forbes.com/sites/alicegwalton/2013/11/15/the-fda-calls-out-yet-another-food-chemical-to-avoid-acrylamide

The publication Food Update from the FDA says that when it comes to frying, less is more. The darker and crispier you cook your potatoes, the more likely it is that they’ll be laden with a carcinogenic chemical called acrylamide. The chemical is a byproduct formed by the combined effect of heating the natural sugars and an amino acid present in vegetables at high temperatures.2 “You Can Help Cut Acrylamide in Your Diet.” FDA. 15 November 2013. http://www.fda.gov/ForConsumers/ConsumerUpdates/ucm374855.htm According to the World Health Organization, acrylamide is known to cause cancer in animals and, in high doses, can cause nerve damage in humans.” Long-term human cancer studies haven’t been conducted yet, but apparently, the link in rats is significant enough to spark the FDA to sound the alarm. The National Toxicology Program’s Ninth Report on Carcinogens says, “acrylamide can be reasonably anticipated to be a human carcinogen.”3 “Acrylamide in Food.” Medicine.net. 15 November 2013. http://www.medicinenet.com/script/main/art.asp?articlekey=47815

And it’s not just potatoes we’re talking about. There’s also acrylamide in grain-based products like bread and cereals, as well as in dried fruits, coffee, and a host of other food items. In fact, experts estimate that the average person’s diet contains 40 percent acrylamide-laden foods. Given that acrylamide also is found in grains, dark toast is a no-go from the health standpoint. If you want toast, make it light. If you burn it, throw it in the trash. And one more bad bit of news: coffee contains acrylamide, a byproduct of the roasting process.

Before you panic, though, keep in mind that the risk has only been found at levels far higher than can be obtained through a normal and balanced diet. As for acrylamides in dried fruits and grains, levels are extremely low…or even less than that. Also, it requires heat of over boiling temperatures for its formation — although one study found that it MAY form in very small amounts in dried fruit. However, subsequent heating of that dried fruit such as in making prune juice, which requires boiling, could increase the amount. But again, this is merely indicated, not proven.4 Amrein TM, Andres L, Escher F, Amadò R. “Occurrence of acrylamide in selected foods and mitigation options.”  Food Addit Contam. 2007;24 Suppl 1:13-25. http://www.ncbi.nlm.nih.gov/pubmed/17687696

The bottom line, though, is that there is zero evidence that eating dried fruit, for example, in any way actually increases the incidence of cancer. In fact, all studies indicate the opposite — that prunes can aid in preventing cancer.5 Fujii T, Ikami T, Xu JW, Ikeda K. “Prune extract (Prunus domestica L.) suppresses the proliferation and induces the apoptosis of human colon carcinoma Caco-2.” J Nutr Sci Vitaminol (Tokyo). 2006 Oct;52(5):389-91.  http://www.jstage.jst.go.jp/article/jnsv/52/5/52_5_389/_pdf

Scientists have known about acrylamide since 2002 and have been conducting studies in the intervening years to determine just how dangerous it is. Apparently, the results of those studies, at least with rats, have not been encouraging; thus the FDA sound-off. The research has determined that the longer food cooks and the higher the temperature it cooks at, the greater the acrylamide content. Frying produces the most dangerous levels of acrylamide, followed by roasting, and then baking. Boiling and steaming don’t seem to yield significant levels of the chemical. By the way, protein-based, animal-derived foods don’t seem to form acrylamide (although they pose plenty of other problems).

What’s a person to do? Knowing that 40 percent of the typical diet is acrylamide-rich certainly isn’t happy news, especially when you consider that another significant percentage of the typical, balanced diet also brings problems (if you consider the health issues posed by meat and dairy). Must we all go raw if we want to stay healthy?6 http://www.gocomics.com/arloandjanis/2013/11/15#mutable_1077818

In fact, it does seem that once we venture away from uncooked or lightly steamed foods, we’re headed for trouble. But of course, we’re not all going to give up toast and stir fries and cappuccino tomorrow. More realistically, you can at least minimize acrylamide exposure. One key is to limit potato intake, as the potato seems to have a particular affinity for acrylamide. The highest levels of the nasty chemical were found in potato chips and fries. Boiling or steaming potatoes is your best bet, or at the least, baking the whole potato. The FDA says that refrigeration actually increases the acrylamide levels in potatoes. The Agency recommends storing them in a vegetable drawer, slicing them, and then soaking them for 15 minutes in cold water before cooking. Apparently, the soaking decreases the acrylamide levels.

There isn’t much you can do about coffee, since the beans get roasted before they reach your percolator, says the FDA. On the other hand, you might want to choose light roasts rather than dark, or better yet, switch to green tea (and not kukicha or genmaicha, which contain roasted twigs and roasted barley, respectively).

Also, acrylamide is found in tobacco smoke, so avoid second-hand inhalation. It’s also probably in your water, so use a filter. And it’s used in industrial applications, but supposedly is regulated.

As for other food items, it’s better to sauté at low heats for short periods of time rather than stir fry on high. It’s better to steam grains, if you choose to eat them, rather than stir-fry them before cooking. If you love the crunchy, crispy parts of your roasted vegetables, you might need to change your taste preferences as the acrylamides concentrate where the crunch is.

When you think about it, though, the rules don’t really change with the acrylamide warning. Avoiding fried foods to the extent possible has long been a tenet of healthy eating habits, as has been lightly steaming instead of cooking vegetables to death in order to retain mineral content. And the bottom line is that the Mediterranean Diet still offers your best bet.