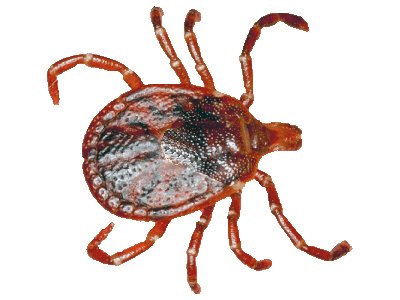 In the bad-news-for-McDonald’s department, it turns out that if you get bitten by a certain type of tick, you can develop an allergy to red meat. While not a diagnosis at the forefront of most physicians’ list of possible ailments, the condition is spreading, with one doctor from Long Island, New York, claiming she alone has seen 200 affected patients in the past three years.1 O’Neill, Natalie. “Tick spreading red-meat allergy through bites.” 9 August 2014. New York Post. 14 August 2014. http://nypost.com/2014/08/09/tick-spreading-red-meat-allergy-through-bites-on-long-island/ While vegetarians might snicker at the problem, it’s a serious threat to those affected, capable of causing anaphylactic shock and even death. And there’s no warning. One day you can eat meat. A week later, eat the same food after the tick bite and you can die.

The culprit is the Lone Star Tick, which has been working its way eastward from its native territory in Texas. It’s about the size of the deer tick, in other words, so tiny that it looks like a speck or a pinhead. The condition has been popping up in almost every state east of Texas, except for Michigan, Wisconsin, and Minnesota. It’s particularly prevalent in those same regions where deer-ticks spread Lyme disease up and down the Eastern seaboard. 2 Carrol, Linda. “This may make you allergic to red meat. How long will it last?” 12 August 2012. Today Health. 14 August 2014. http://www.today.com/health/tick-may-make-you-allergic-red-meat-how-long-will-1D80054116

It seems that the little buggers cause the problem because they transport a sugar called alpha-gal, a component of all forms of red meat from burgers to pork chops. When the tick bites its victim, it injects the alpha-gal into the person’s bloodstream, and then the person develops antibodies to the substance. The next time sloppy Joe’s are on the menu, the person has a full-blown allergic reaction.

Doctors didn’t even know it was possible for ticks to trigger the allergy until 2011, when researchers at the University of Virginia sought to find out why so many people in the area seemed to be developing allergies to red meat late in life. According to Dr. Robert Valet, a professor at Vanderbilt University, “Classically, three to six hours after eating red meat, [a person with the allergy] can get sick with hives, swelling, and problems breathing. They may even have a full anaphylactic reaction in which their airways close.”

In other words, developing a meat allergy is as serious as having a peanut allergy. As Dr. Valet says, “I think it is something that certainly belongs among the most important food allergies, particularly in the Southeast. A reaction can include all the classic symptoms, such as vomiting, itching, diarrhea, and a drop in blood pressure. The one difference is that most allergic reactions to food occur immediately after contact with the allergen, but in this case, symptoms may not manifest for up to eight hours after eating meat.3 “Tick Bites Linked To Red Meat Allergy.” 13 August 2014. WebMD. 15 August 2014. http://www.webmd.com/allergies/news/20140813/tick-bites-red-meat-allergy

If you have the allergy, it’s important to know it; and if you do, it’s super-important to avoid meat. That’s a problem, because to date, few physicians or patients would dream such a thing is possible-to become allergic to meat after getting bitten by a tick.

A blood test can confirm the diagnosis. Those with the allergy usually can still eat chicken and fish, but in some cases, they need to stop eating dairy products as well as meat. Treatment is the same as for any other allergy. Avoidance is key, but if an episode arises, patients can take antihistamines, or if necessary, steroids. So far, health practitioners haven’t had much success with desensitization techniques.4 “Red meat allergies likely result of lone star tick.” 20 February 2014. Science Daily. 15 August 2014. http://www.sciencedaily.com/releases/2014/02/140220102727.htm Also, if a person suffers multiple bites over time, as is common in tick-ridden areas, the allergy will worsen.

Some might say the Lone Star Tick is doing its victims a favor since many believe that red meat causes negative health consequences. (Although that may be more a question of how the meat is raised and what it’s fed and whether or not it’s injected with growth hormones and antibiotics.) Those who give up burgers and steaks (at least the commercial kind) might, in fact, reap some health benefits, but still, the Lone Star Tick is bad news. It turns out that the same type of tick can cause other serious conditions, including ehrlichiosis and tularemia, two types of bacterial infection that can wreak health havoc and even kill victims. To make matters worse, it’s still not clear if those diseases can be cured by antibiotics or any other interventions.

It seems that ticks belong in an unfortunate class with mosquitos: critters that seem to serve no purpose other than to spread disease and discomfort. Plus, they’re ugly as heck and carry a veritable smorgasbord of disease. The CDC’s page on “Tickborne Diseases of the US” lists 14 horrible conditions that ticks can bequeath to you, including Lyme disease, Rocky Mountain spotted fever, babesiosis, and tickborne relapsing fever (TBRF)–all potentially fatal if left untreated.5 http://www.cdc.gov/ticks/diseases/ The bottom line is that unless you’re prepared to break a meat addiction, it’s in your best interests to avoid sitting in the grass or trekking through wooded areas in shorts in those parts of the country where ticks thrive.

Gallery image with caption: Diseases Of The Respiratory System

Gallery image with caption: We Are Not Yet Done with COVID-19