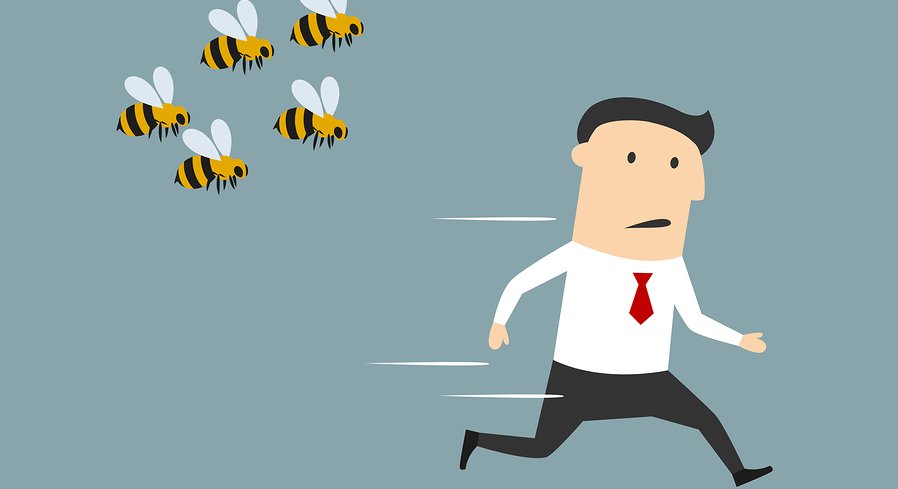 When I was a kid, I had the unfortunate experience of stepping on a yellow jacket nest while scavenging the woods looking for teepee poles. In seconds, it seemed, a cloud of the flying things swarmed my body from head to foot, stinging me all over many times. My parents ran to my aid when they heard me screaming, and though they swatted at the yellow jackets with their bare hands, neither of them got stung even once. I, on the other hand, ended up with dozens of stings and a cortisone shot.

And then, last week, my dog was playing in the yard with his doggie pals when all three of them came running into the house gyrating and swatting their faces with their paws. It turned out that all three were being swarmed, and though a pack of us humans tried to swat away the bees with our hands, the bees only stung our poor pups, who got stung many times.

What causes bees to choose particular victims, to act so aggressively, and what can you do if you end up in a similar situation?

Insects typically sting only in self-defense. Honey bees, for instance, rarely sting when they’re doing bee business such as hunting for pollen. They will attack, however, if you swat at them, accidentally disturb their hive, or step on it.1 “Why Do Bees Sting?” Wonderopolis. 8 September 2017. http://wonderopolis.org/wonder/why-do-bees-sting Like watchdogs, they’re programmed to protect their home. Since honeybees build nests above ground, often in a cavity in a home exterior wall or in a tree trunk, the observant (and lucky) person can easily spot the hive and avoid getting in harm’s way.

Not all bees are as nice as honey bees, though. Yellow Jackets, for instance, are really the sociopaths of the various bee species. They’re far more aggressive than honeybees, and will chase their target for far distances to inflict a sting. They like to nest in rodent burrows below ground, which means if you’re working or playing outside, you could be at considerable risk of stepping on a hive as soon as you stop watching where you’re going.  And you don’t necessarily have to step on the hive to incite the yellow jackets’ wrath. Even if they feel a vibration some distance from the nest—if you’re walking or gardening or playing fetch, for instance—they’ll seek out the source of the possible intrusion and inflict damage proactively.2 DeJohn, Suzanne. “All About Yellow Jackets, Bees, and their Kin.” Gardener’s Supply Company. 8 September 2017. http://www.gardeners.com/how-to/yellow-jackets/7700.html

Different types of bees have different types of venom and different stinging mechanisms. When a honeybee stings you, it injects a type of venom called apitoxin, and that’s what hurts and causes whatever reaction you’re going to have. The honey bee stores its venom in a sac in its abdomen, and when it attacks, it inserts a hollow tube-like structure into you, squirting the venom into your body. At the end of the tube there’s a barbed stinger, which stays hooked into you at the insertion point. Sadly for the bee, the stinging apparatus also includes the bee’s abdomen, digestive tract, and even some muscles and nerves, which also stay behind, hooked into you. That’s what kills the bee. The stinger can continue to deliver venom for as long as 10 minutes after the bee’s demise, which is why it’s important to find the stinger and remove it. Experts warn that you should not pull at the stinger, which may cause it to release even more venom. Instead, scrape it off using your fingernail or a credit card or something similar.

Yellow jackets, on the other hand, can sting repeatedly. Whereas the honey bee stings you once and then dies, yellow jackets, wasps, and hornets can retract their stingers without hurting themselves, and do it all over again.  That’s why it’s so horrific if you step on a yellow jacket’s nest: the entire hive responds, and given that a single hive can contain thousands of bees, you can get mighty hurt.

Bumblebees also can sting you multiple times, but they have smaller hives, rarely over 100 bees. Plus, they’re so big that it’s easier to see them coming and get out of harm’s way. While wasps and hornets can sting repeatedly, they build their hives above ground, so the chances of stepping on a hive are nearly nil.

And if you live in any of the Southwest states, from Texas through Southern California, you have to contend with Africanized killer bees.  These bees are a hybrid of the typical honey bee cross-bred with the African honey bee. They are more defensive than any other type of bee, aggressively guarding their hives. When roused, they deploy in great numbers and are happy to swarm their victims and chase them for a quarter of a mile or more. They have killed some 1,000 humans, with victims receiving ten times more stings than from European honey bees.

The swarming phenomenon, by the way, is the result of a kind of game of “telephone” played by all varieties of bees. The bee’s venom includes a pheromone component that it broadcasts when it stings you. Other bees far and wide get a sniff of that pheromone and come racing to the scene to participate in the carnage. Since the pheromone now resides in you, other people swatting at the bees won’t discourage them or receive their wrath. But you, with the broadcasting pheromone, will continue to get stung as long as the bees can reach you, so it’s essential to get out of their path. Run! Go inside if possible. Keep moving until you lose them.

The dangers of getting multiple stings are several. First, there’s the possibility of allergic reaction. If you notice swelling that is spreading beyond a little bump, if your throat feels like it is closing up, if your chest feels constricted, if it’s hard to breathe or speak or you break out in hives, get help! By the way, the chemical composition of yellow jacket and wasp venom is a bit different from bee venom, and so it’s possible to be allergic to honey bee stings, for instance, and yet not react allergically to wasps or yellow jackets3 “How do bee and wasp stings differ?” 5 May 2017. Boston Globe. .

If you get lots of stings, perhaps after disturbing a hive, it’s possible that the body will react as if it’s allergic even though a single sting wouldn’t cause such a reaction. When you get 10 or more stings, essentially, you have an overload of poison in your body. This is the one time you want an antihistamine within ready reach. Even if you’d normally stay miles away from such medication, it’s important to control possible allergic reaction fast, and so taking an antihistamine is recommended.  Likewise, if your pet steps on a hive, it’s a good idea to give the appropriate amount for the pet’s weight, and then rush to the vet. Even our superbly holistic vet, who abhors vaccines, recommended antihistamines in case of insect stings.

The worst part of stings under normal circumstances is the ouch factor. Bee stings hurt. Fortunately, the pain usually only lasts a few hours and you’ll probably have a localized bump and some redness to show for it.4 “Treating Bee Stings.” Dr. Greene. 10 September 2017. http://www.drgreene.com/qa-articles/treating-bee-stings/

What should you do to find relief after getting stung? There’s plenty of advice for home remedies on the web: use ice to keep the swelling down, rinse with soap and water to prevent infection, use honey, baking soda, soak a bandage in apple cider vinegar and then apply it to the area, or just soak the hurting area in vinegar. According to author Chip Brantley, who performed a seemingly insane experiment where he finagled to make bees angry and get stung daily over a period of time so he could test out various sting remedies, the best soothing came from Caladryl (calamine lotion with an analgesic), plain old ice, and a smear of traditional toothpaste like Crest.5 Brantley, Chip. “Sting Operation.” Slate. 10 September 2017. http://www.slate.com/articles/life/shopping/2003/09/sting_operation.html

My own experience when I got a centipede bite last year (think bee sting pain, times 100) was that the traditional recommended home remedies didn’t do a thing—forget vinegar, ice, honey, baking soda poultice and so on. The one thing that took down the pain down was ripe papaya smooshed against the wound. There’s an enzyme in papaya called papain that breaks down the venom fast, and it works on bee stings as well as centipede bites. Of course, if you don’t live in the tropics you might not have papaya on hand, but if you do, you’re in luck.

Better yet, try to avoid getting stung, unless of course you are using the bee venom for therapy like Gwyneth Paltrow (called apitherapy, bee venom is given for rheumatoid arthritis, nerve pain, multiple sclerosis, tendonitis, fibromyositis and more.) But, if you are like most, you may want to avoid getting stung. First, don’t wear perfume. Perfume attracts bees (you smell like a flower). Other things that attract bees include bright colors (you look like a flower), food on a plate, and open soda cans.  And do not swat if bees come near you.  You’re much better off remaining calm and motionless so you don’t excite their defense instinct. Finally, this from a beekeeper: wear a hat. Bees equate hair and fur with threatening animals, so if they find your hair, they’ll attack. And wear shoes when walking in the grass or anywhere outside where yellow jackets may lurk.